It’s been a long time coming, but it’s finally time to put the boards on. The skeleton (or frame) is done, the lighting is ready to be installed – with the pun fully intended, the stage is set.

So far, most of the work has been pretty easy to achieve with just one person. Since the decking boards are 5.4m long and you need to drill, countersink and screw hundreds of times, it’s so much easier with two people. Therefore I called in my awesome brother-in-law who not only has built a couple of decks before, but – and more importantly – is someone who I work really well with.

I think the key thing here is to be able to find someone who is on the same page when it comes to helping. There is nothing worse than spending more time arguing than building. The key to this, I’ve found, is to assign tasks. If each person has a specific task that they need to do and discussions happen prior to organising that, everything runs much more smoothly.

Anyway, to the pics…

This photo above shows some really cool things. Firstly, the boards themselves which I have already discussed and given props to. Secondly, the screws. They are stainless steel (as recommended by the product sheet) and also dipped in a brown colour to look less obtrusive once in the deck.

Notice that the boards are evenly spaced. For this we used tile adhesive applicators which are about 4 mm wide and sit nicely in between the boards while you screw them down. You can see them in on the left hand side. This was Jake’s idea (my bro-in-law) and an exceptional one.

Next it’s important to note that there are three drills on deck. The first is for drilling the holes for the screws, the second for countersinking and the third for driving the screws in. The way we did it was that Jake would drill and countersink and then I would put the screws in. Three drills makes everything easier because you don’t need to keep changing the bits. It is also easier with 3 people, (a drill each) but since we had very limited space, two worked just as well. The only problem with the corded drills is that they tangle, but you can see from the pic that Jake threw the cord over a branch and it seemed to help.

You can also see clearly how we’ve managed the trees coming through the deck. No fancy circular holes, just stopping the boards with a gap for the tree with the battons around the space. This not only looks good, but it’s easy.

The reason for this photo was to highlight a mistake I made and more importantly how we fixed it. We decided that with the weight of the boards and eventually people as well, there wasn’t enough support – or more importantly, too much distance between the support posts. Therefore we added in extra support posts from off cuts of 90×90 that I had kept. We dug a hole, inserted a brick, belted it with a rubber mallet and then sat the support post on top. To get the post in, we lifted the deck a bit and then put it in place to ensure it was tight and solid. We also put a couple of huge decking screws in there to stop it from moving in future. This added heaps more support and although time consuming gave a much better result in the end. Ideally, it should be concreted in, but the boards will hold it in place.

The above photo is a close up of the area around the tree. There will be boards forming a wall behind the tree, so the battons will be hidden, but you can see how much space I left for tree growth and how we attached the boards there. 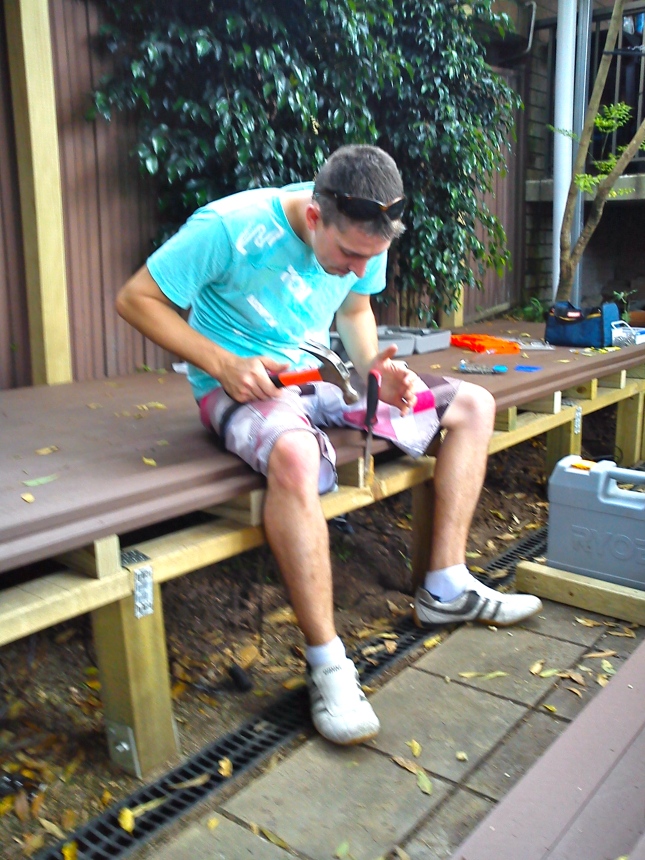 Due to the string line issue that I have mentioned in previous posts, we found that the deck did bow out a bit and that created some problems. Also, we found that looking down the line, the battons and the support post in the middle stuck out a fair bit which would result in a visible bow to the deck. We decided that we should chisel back the battons and then give it a big hit with the belt sander to take it back to a less noticeable bend. In the blurry photo above, you can see Jake going hammer and chisel on the batton.

Jake then went through with the belt sander and evened things out somewhat. Of course this still resulted in a slight bow, but what we found was that once the boards were on, it wasn’t as noticeable as it would have been had we not gone that extra step. In fact, you can see in the photo below that it actually turned out quite well. 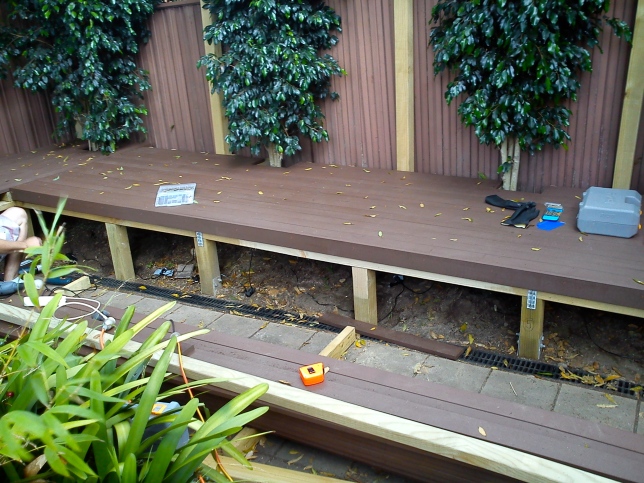 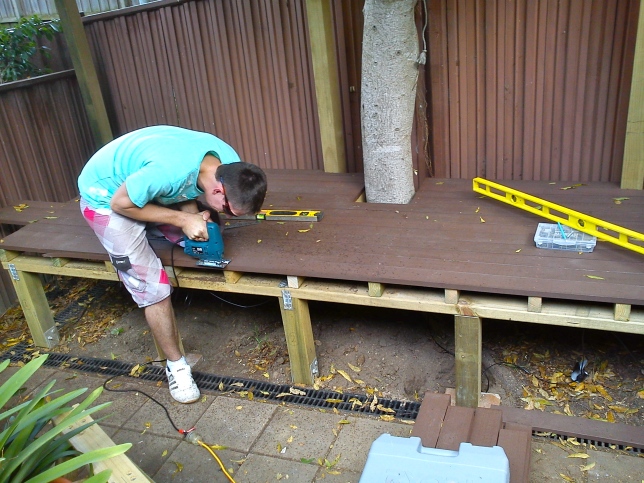 However, the gap on the other side was more problematic. The over hang was substantial and where we thought we would originally just be able to pack it out, it was just too large a gap. After considerable discussion, we decided that it was best to actually thin down the front board and then do a little packing out to make as even as possible. Since the overhang was pretty big, we ruled a pencil line to where we wanted to take it back to and then used a jigsaw to remove the majority of the waste. Then we went through with the belt sander and evened it out and took it back a little more. We put washers around the decking screws to pack it out and the end result was really impressive. The board didn’t look noticeably thinner, but the front fascia board fit like a glove! The extra time, again, taken to even this out, really gave an excellent finish.

Overall, we were really happy with the way it all turned out and after two days of hard slog trying to avoid rainy periods, we finished. There’s still a lot of work to do, but it will have to wait for another weekend.

The finished product so far… – a little blurry, but you can also see where the actually lights were installed but using a hole saw to cut into the decking board. I think it looks fantastic!! 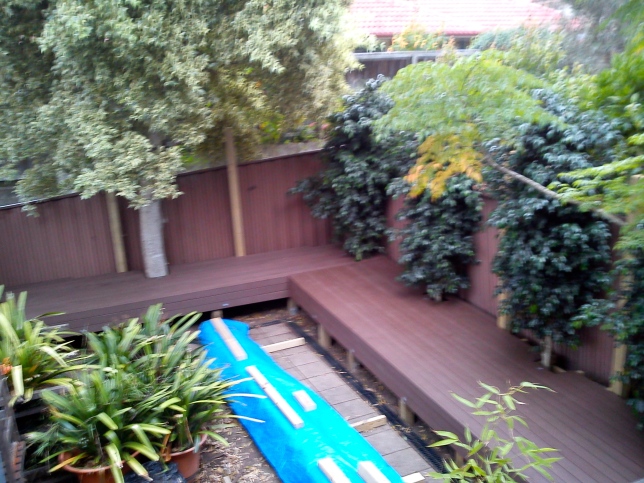 Posted by myriadprojects on February 1, 2012 in Decking [COMPLETE]

Wow. This is actually really cool. I need lights to put inside the deck I’m building and thought it would be cooler and cheaper if I did it myself.

Firstly, it must be said that there is a thing called a “hack-space”. It’s a shelter for nerds, geeks, artists and any combination of the three, to gather and support each other. Not in a Nerds Anonymous way, but to help each with projects, all chip in for new equipment, have a place to leave junk that you can raid, etc.

So I’m affiliated with a Sydney based hack-space called Robots And Dinosaurs, which is rad. There’s a lot of knowledgable people there and they helped me a couple of days ago to put together my first circuit containing electronic components. I learned how to solder onto a board, use a prototyping board, how to wire up components and how to do formulas that apparently mean stuff.

The very next night, I took the components home and wired them all up and the circuit didn’t work. I gotta say, I’m a little disappointed. I expected to be an electronics genius after one lesson. Anyway, I have had offers of help to work out why it’s not going and this is the reason for this post.

First things first, planning. The following photo is a page from my moleskine where we worked out all the numbers and did diagrams and so on. Any one reading this, I’m happy for you to point out errors, but it must be said that we got this all working on the prototyping board, so I’m thinking the maths is good. 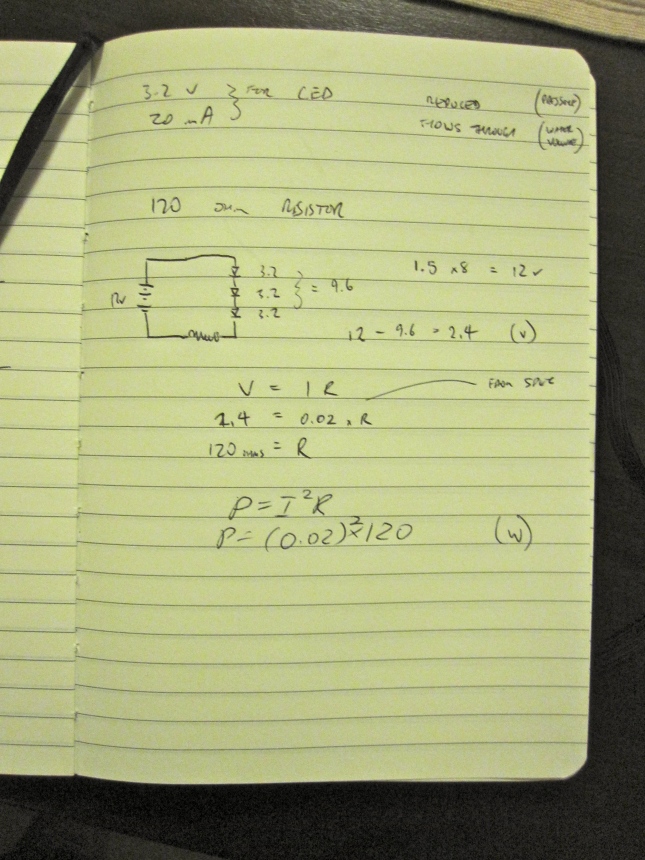 So, as I said we got it working on the prototyping board and it was all good. All three LEDs lit up enough to walk around the back yard in darkness. I did not buy any extra stuff and I didn’t have any other gear at home.

When I got home, I thought about it and realised that I wanted the lights spaced out. I decided then that I should connect up the circuit using wires instead of using a board. So I grabbed some left over good quality speaker wire and used that to wire the circuit up.

I also decided to use connectors to make sure they were solidly in place, but so I could remove them once I’d tested it and seen how bright they were in situ. The above picture shows how I have connected them. What it doesn’t clearly show is that the cable has two wires initially joined together (I split them and taped them up to prevent pulling on the connection). The positive wire is square in shape and the negative is round. This makes them easy to tell apart, but also easy to hide away. I connected the positive to the positive leg and negative to the negative leg. I also then put each end of the wires on to two batteries held together so I could test everything was fine.

The final circuit looks like this on the ground.

There’s not much detail, but you can see it’s all connected. Also, don’t be put off by the LEDs glowing, that’s just the reflection of the camera flash.

To give more detail, here is a close up of where the power source and resistor are all connected.

Now keeping in mind that this worked perfectly on the prototyping board, I was a bit sad it didn’t light up. I have placed it on my dining table (on top of a towel) and pulled the multimeter out… I discovered that if you try to check how much resistance there is through the LEDs they actually glow a little. This at least meant that they were connected fine and that they work. Below are the three LEDs being tested.

Then I checked the resistor is working. It is a 120 ohm resistor and therefore should have a resistance of around 120 ohms.

Then I worried about the way these banked connectors would work. Therefore I put one of the tips of the multimeter on one end and the other on the alternative end. It was still all good.

And then since everything else is working, it is probably the battery pack, right? Wrong. Here’s the proof.

The only thing that seems a little out of place is the slightly higher than 12 v reading. I’m not sure if it’s enough to throw out the resistor, but a) I don’t know why it worked before then, and b) I can get a new resistor if needed.

So I’m asking for thoughts, comments and suggestions. I need to get this up and running pretty damn quick.

I will also post the solution and how I went about fixing it.

Posted by myriadprojects on January 12, 2012 in Decking [COMPLETE], Electronics